Frankly, I had expected more than this from Buddha.

I was teetering at the top of the Eighth Wonder of the World.  My journey to Indonesia had been long and the heat of the Javanese plains was oppressive.

I expected at least a subtle arc of light when our fingers touched, a brief flash of enlightenment, perhaps the ultimate, a swift peek at Nirvana.

Alas, Buddha sat, maddeningly serene, eyes half-closed, huge stone hands resting eloquently.  Encased under a giant latticed stone stupa on top of the 15-story high Temple of Borobudur, this Buddha and almost a hundred others like him peered to eternity across the velvety green Kedu Plain on the island of Java.

The day after my arrival in Yogyakarta, a teeming university city in central Java, I set out with a guide said to be a descendant of a temple stonemason. I was told visitors to Borobudur seek blessedness, nirvana, extinguishing of self. Uncertain but undaunted, I was ready.

Sudhi spirited me through the cacophony of Yogyakarta, maneuvering the old Mercedes sedan deftly through the dusty pedestrian-packed streets, dodging stony-eyed oxen and over-stuffed tour buses.

We broke free of the crush and navigated the road northwest to Borobudur through the lush green countryside. The undulating rice fields shimmered with humidity as the morning sun marched to its noontime zenith.

Over the blast of the air conditioner, Sudhi spoke reverently of Borobudur, this elaborate 1,000-year-old Buddhist temple we were about to visit.

“It’s the largest in the world,” he said, “and surely the most impressive site in all of Indonesia.”  His Eighth and Ninth Century ancestors, he related proudly, were among the 10,000 anonymous laborers and artists who meticulously cut, moved and sculpted the 6,500 cubic yards of andesite stone. 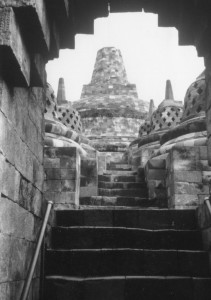 As a child he had heard stories how they dragged the stones across the plains and carefully fitted them, one by one, to create the most important Buddhist sanctuary in Southeast Asia. I would feel the energy, he said. Buddha and I would connect. I grew impatient with anticipation.

As we nudged the big car under a spreading tree in the visitor parking lot, I could not see the temple and began to wonder at my folly. We walked silently up a short cobblestone path, past elfin Javanese children twirling homemade tops. They distracted me with pleas to come, look and buy.

Sudhi motioned me along and I followed.

Then I saw it, rising like a dusty layered wedding cake from its shimmering perch on the massive plain. A huge pyramidal wedding cake with intricate carvings over the entire surface.

Sudhi nodded at my gasp, gesturing for me to approach the gate where we would begin the ascent and make our way through the bas-reliefs.

“Come; learn about my ancient Java,” he said.

I had to admit Borobudur was living up to its advance billing. The temple’s architects and sculptors had designed it for veneration, worship and meditation, then sent priests in search of the perfect site and brought stonecutters, masons and artisans from the broad reaches of the Indonesian archipelago.

The finished product was, in a word, massive.

Unfortunately, Sudhi lamented, the history of the temple was not without its dark side. Politics and bickering in the ruling Buddhist dynasty got in the way of loftier goals, and by the end of the Ninth Century, the temple fell into neglect and was nearly reclaimed by volcanic debris and wildly-encroaching vegetation.

He apologized for his ancestors’ brief departure from serenity and purpose.

As luck would have it, he continued, an Englishman in the early Nineteenth Century, undaunted by the noonday sun, became obsessed by the stony structure and set about to restore it.

The work he set in motion continued in fits and starts all the way to 1983. Then a joint government and private sector effort applied the finishing touches and it was finally opened to the public.

Now, here I was, one of tens of thousands of annual visitors, inching my way up the narrow humidity-slicked steps, moving past the intricate bas-reliefs depicting the spiritual life of Buddha and the more mundane life of ancient Java.

The unfolding saga, made real by Sudhi’s story telling, held me transfixed. I stopped, listened to his gentle cadence and then followed his lead, climbing the narrow staircases, moving from terrace to terrace, closer to the resting place of the giant Buddha statues. The promised Encounter was near.

With reverence, Sudhi recounted the building of Borobudur, and as he spoke I ran my fingers lightly over the carved surfaces, unable to resist the connection to the ancient stonecutters. I could see by the smoothness I was not the first.

Peering to the terrace above, I imagined a procession of saffron-robed monks moving quietly, swaying in the rich morning light and chanting their monotone prayers to the attainment of Nirvana.

We continued upward then to the topmost terrace, 150 feet in the air, where three circular platforms supported dozens of massive bell-shaped stupas of stone lattice-work, each resting on a stone lotus blossom.

How on earth had they accomplished this, I wondered as I caught my breath and rested against one of the stupas.

I looked out over the plain at the misty rice fields that gently bumped up against the distant mountains. I imagined working in this heat and humidity. Obviously the ancients had been seduced by the call to honor the greatness of Buddha.

Sudhi, his diminutive face beaming, urged me to the edge of one of the stupas where he insisted I climb up and reach inside until I touched Buddha’s hand.  A guarantee of good luck, he said.  I must do it, I had come so far.

I strained for several moments and finally succeeded, touching the cool stony surface of Buddha’s giant finger. I waited eagerly for the zing of connectedness Sudhi had assured me would happen.

Surely my pilgrimage would have meaning. All this perspiration would take me to a higher level. But I felt nothing. I was dismayed. Perhaps the stifling air impeded the expected zing, I reasoned with Western logic, but still I felt nothing.

How long was too long to wait? Half amused, half deflated, I climbed down. Sudhi had been so confident. I shook my head, shrugged, and his face became passive. Had I failed a test?

The quiet was as heavy as the air and it seemed time to go. Sudhi silently motioned for me to begin the descent away from the massive Buddhas. His face was closed, expressionless.

We moved slowly down through the stone terraces, one by one, past the story-telling reliefs, carefully picking our footholds on the narrow stone stairs.

Swaying slightly from the height and the breathtaking humidity, I pondered my apparent failure. At ground level, lightheaded from exertion, I leaned against the gate.

“One moment,” I said. “Let me catch my breath.” Sudhi nodded patiently.

Then it happened. I felt a sudden rush of elation followed by an overwhelming sense of peacefulness. Was it mere relief at completing the climb and descent without tripping and plunging headlong to the plain?

Or perhaps…..a delayed response from my contact with Buddha!  Sudhi looked at me with somber intensity and then slowly the corners of his mouth lifted in a smile.

He nodded with satisfaction, again looked at me sharply, then quickly turned and led the way back down the cobblestone path where the tiny children played with the whirling tops, toward the tree-shaded visitor parking lot in the distance.

Apparently Buddha and I had connected after all.

The Weight of Wisconsin
7ads6x98y 