If you have never been to San Antonio, Texas during the annual Fiesta San Antonio, I have three words of advice: Go! Go! Go!

Every year during the month of April, this picturesque south Texas city with a rich heritage blows the doors off with a 10-day citywide extravaganza packed with sparkling events, remarkable food and music, culturally-significant activities, lavish parades showcasing more royalty than you’ll see in London in a month, and hoot-and-hollerin’ foot-stomping fun.

Kids love it and even the family dog gets into the act, but more about that later.

Almost more amazing than the events themselves is the fact that the entire festival is planned and executed by some 75,000 volunteers representing roughly 95 nonprofit organizations who work nonstop for an entire year to make certain that no detail is overlooked.

Even as the last flutter of confetti drifts to the ground on the annual event, next year’s committees, overseen by the Fiesta San Antonio Commission, are hard at work. Funds raised throughout the year pay for the roughly 150 events or are used for college scholarships, schools, children’s groups and other causes that directly benefit San Antonio’s young population. The commission itself is funded by private sector donations and receives no government funding.

The century-year-old festival that began as a tribute to the fall of the Alamo and Sam Houston’s victory over Santa Ana at the Battle of San Jacinto focuses a mega-watt spotlight on San Antonio’s cultural diversity and rich heritage.

Beginnings are traced back to 1891 when a group of San Antonio women decorated horse-drawn carriages, paraded to the Alamo and pelted each other with flower blossoms. The original “Battle of Flowers” parade became the annual 10-day event that now draws three million participants and spectators from Texas, the U.S. and around the world.

The festival kicks off on a Friday in April (dates vary annually) and marks its opening with an official ceremony followed that evening by a lavish masked ball. Weekend events include fund-raising run/walks, a wide variety of family activities, style shows and luncheons, tours of historic homes, the Southwest School of Art and Craft Art Fair, the investiture of King Antonio and his royal court and yet another sumptuous ball.

There is hardly a corner of the city that is not drawn into the celebration. From a simple mariachi mass at a local mission chapel to the wildly popular Night in Old San Antonio (NIOSA typically runs for four nights), every walk of life, every cultural group from San Antonio’s melting pot has its moment in the sun.

On Monday evening, hundreds of thousands of spectators pour into downtown San Antonio’s River Walk for the Texas Cavalier’s River Parade, a highlight of Fiesta since 1940 and presided over by King Antonio and his royal court.

The King is selected annually from among the ranks of the Texas Cavaliers, an organization of San Antonio business, civic and community leaders that was founded in 1926 to preserve the ideals for which the heroes of the Alamo died.

The enthusiastic crowd, seated on chairs and perched on bleachers, leaning over bridge railings and hotel balconies along the meandering three-mile-long waterway, thunders approval as the 50 lavishly decorated floats, reflections shimmering in the calm water, wend their way through the heart of the city.

Music from the floats fills the air, jazz intermingling with classic oldies, military marches battling it out with mariachi music, teen bands wrenching wails of sound from electric guitars, and gentile waltzes wafting from the windows of floating plantation homes.

The already revved-up crowd, energized by the cacophony, cheers loudly and takes picture after picture, the flare of camera flashes filling the evening sky. Those festival volunteers lucky enough to be on floats show off their best royal wave, tossing wrapped candies and festival medals to outstretched hands.

Though the river parade would be a fitting grand finale to any festival, the San Antonio event goes on for another six days.  And right in the middle of the festivities is the “other king” known as El Rey Feo, roughly translated as “the people’s king.”

Rey Feo has been a San Antonio tradition since 1947, when a group of San Antonio businessmen volunteered to establish a fund-raising program for college scholarships. Today, San Antonio business and community leaders compete for the title of king by raising the most scholarship money. The People’s King is highly visible throughout the festivities and serves as a goodwill ambassador for the city as well.

It’s not uncommon for the reigning king to also make appearances at the Macy’s Thanksgiving Day parade, the Rose Bowl Parade in Pasadena and the St. Patrick’s Day greening of the Chicago River before passing his crown to the next year’s King. 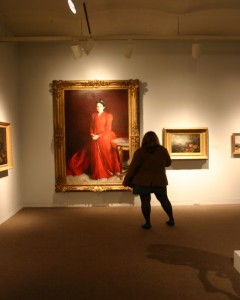 Any visitor to San Antonio during Fiesta should allow time for a serious look at some of the other accomplishments of this can-do city. The defunct Lone Star Brewery building, for example, was readapted for use as the stunning San Antonio Museum of Art, thanks to efforts of the visible and vocal San Antonio Conservation Society.

Rather than destroy the industrial elements of the vacant interior, the architect blended them in to a redesigned functionality, creating a serene setting for the museum’s world class collections of American, Asian and Latin American art.

The King William District is another example of San Antonio’s dedication to preservation. Many of the impressive tree-shaded homes were originally built by Germans who had immigrated to Texas in the 1840’s, settling in the area that became known as “Sauerkraut Bend.”

Over the years the originally magnificent homes and charming cottages changed hands and lost their luster. In recent years, the district has again blossomed as one after another of the structures have been restored.

But let’s return to Fiesta and the special event custom-made for the family dog. The Fiesta Pooch Parade is billed as a “5K, 100,000 sniffs, too many tail wags to count walk” that gives San Antonio pooches and their humans 15 minutes (or more) of fame.

Pet owners adorn their dogs in inspired, often lavish or trendy couture and transform the kids’ little red wagon, baby stroller or a bicycle basket into a flower-and-ribbon-bedecked extravaganza in a quest for the title of Canine King or Queen. As with most Fiesta events, proceeds benefit a local charitable organization.

Even without its colorful festival, San Antonio is well worth a visit. Add the over-the-top events of the 10-day April extravaganza, and you’ll come away with great memories and a very good feeling about this city that pulls out all the stops in the name of helping others.