“During winter months when the water is low, I wade through river and creek beds around here. That’s when I find the best flint rocks,” explains Paul Davis as he and I chat at his favorite hangout deep in the lush rolling hills of southern Kentucky.

Paul was born and raised in Tompkinsville, Kentucky, population around 2,600, little more than a stone’s throw north of the Tennessee state line. Just about any day of the week you’ll find him at the Monroe County Super Dome, a place that isn’t quite super and doesn’t have a dome. It is a sports arena of sorts, but not what you’d expect.

At this Super Dome you won’t find hard-charging muscle-bound steroid-pumped football behemoths suited up for one last practice before the ESPN season opener. This isn’t that kind of place and Monday night (or any night) football is probably not a real big deal in Tompkinsville.

Most of the guys who hang around here favor baseball caps and dusty jeans, sometimes bib overalls if they come right from the farm to catch a game or two before heading home for the night.

So if they’re not pumped-up athletes, what’s a Super Dome doing in a tiny burg like Tompkinsville? And what do flint rocks have to do with it?

The game that’s played inside the former tobacco barn on the 20-something by 40-foot hard-packed dirt “marble yard” under the white-green glare of four florescent lights is called rolley-hole marbles and it’s a far cry from the game of marbles we played as kids. 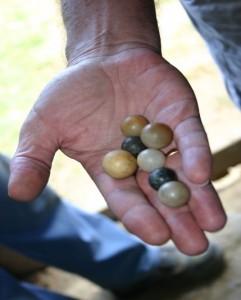 Those glassy orbs we flicked would not stand a chance in this crack-shot game that’s a strategic combination of billiards, golf, bocce and croquet—and, some say, the forerunner to the game of golf.

Rolley-hole dates way back—so far back, in fact, that Shakespeare wrote about a similar European sport called Cherry Pit, and seventeenth-century Dutch delft tiles picture marble players. In Tinsley Green south of London, a version of rolley-hole has been played every Good Friday for over 400 years.

Rolley-hole marbles are handmade from flint, a silica-based quartz-like rock that’s second in scratch-hardness to diamonds. It comes in several colors—yellow, red, brown, white, gray and black—with yellow and white being the colors favored by most players.

“The marbles are one of the keys to winning,” says Paul Davis. “They have to fit the hand and be as close to flawless as possible.” Paul should know; he makes a good number of the small spheres used by players at the Dome, in neighboring Tennessee and as far away as Europe, rough-honing the coarse stone cube first on a grinding wheel, then smoothing, shaping and tumbling the flint rock he plucks from the streams and rivers that trickle, tumble and rage through the green hills of southern Kentucky.

They’re smooth and silky when he sells them, about $20 for one that’s less than an inch, as much as $50 for the bigger ones that are used in another version of marbles. Over the years the marbles develop even more shine as they’re carried around, clicking in their owner’s pockets.

In Monroe County, Kentucky, and in neighboring Clay County, Tennessee, rolley-hole marbles has been played for over 150 years. Techniques are taught and handed down by neighbor, friend, family member. Marble yards are common, though an enclosed one like the Monroe County Super Dome is rare. 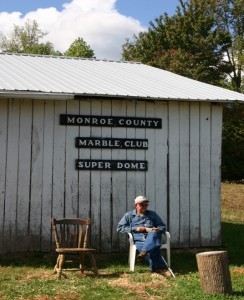 Players, mostly adult males in the 40-70 age range, show up at the Dome at four o’clock every afternoon and twice on Sunday to play in the wooden shack that isn’t quite finished and probably never will be. The outside of the building is covered with loosely-nailed vertical boards and inside most of the walls are covered with mismatched sheets of shiny insulation. An old wood stove is fired up when the nights cool off, fueled from a jumbled wood pile outside the door that also gives shelter to a playful black and white cat. Overstuffed chairs and recliners that have seen better days squat here and there.

Colonel (that’s his real first name) Bowman is one of seven Tompkinsville brothers who all have played marbles. Colonel still does—he’s been the national champ a few times. Now his grandson Ben Walden is polishing his skills to follow in Granddad’s footsteps.

“I been playing ever since I was able,” young Ben says, kneeling to line up a shot.

“Since I was three or four,” Ben replies, never taking his eye off the slight impression in the dirt floor about ten feet away, one of three evenly spaced along the 40-foot length.

“I’m fixin’ to be national champ too,” he says, launching an impressive shot that comes to rest precisely in the middle hole.

Championships seem to come pretty easy to the Monroe County players. In 1992 club members from Monroe County, Kentucky and Clay County, Tennessee (many of whom had never before left their respective home towns) traveled to England to compete in the British Marbles Championship at the renowned Tinsley Green south of London.

They won with a resounding “thwack,” completely whupping the competition and winning the World Championship later that same day without losing a single match. The score: 10 for Kentucky-Tennessee, zero for the rest of the world. The governor of Kentucky officially declared Monroe County “The Marble Capital of the Commonwealth of Kentucky.”

The Marble Dome game of rolley-hole is one of strategy and skill, played by a team of two against competitor teams until the marble yard is cleared. The object of the game is for each two-member team to shoot their marbles into each of three holes, traveling up and down the 40-foot yard three times while keeping their opponents out of the holes. The first team to take 12 holes in order wins. 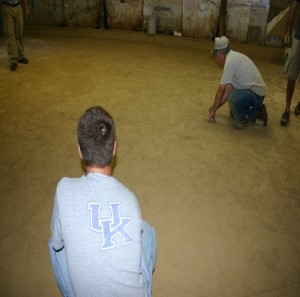 Players stand, squat, kneel, hunker and hover, calculating best-shots, bending sometimes-creaky knees to line up just so and send the marble flying with a thumb-knuckled flick. Strategy is a big part of the game and so are the jibes and staccato remarks that toss back and forth among team members and opponents.

“Know what finally takes a player out of the game for good?” asks Earl Coulter with a nudge to my arm. “The knees or the hips go and when they’re gone, they’re gone,” he says, nodding knowingly.

Earl still hangs around the Dome, even though at age 71 he can no longer “get down” to play. He was once a regular and now the Dome is his clubhouse, the players still his buddies.

The aging of the players is a concern. There are a few who are younger and carrying on the tradition. And then there’s Colonel Bowman’s grandson Ben who has his sights set on winning the national championship someday.

He isn’t sure if he’ll ever play in England, though.

“Don’t know about that one,” he says with a shrug.

“Ever since we beat everyone there, well, they haven’t invited us back.”

A Cape Cod Race Against A Kennedy
7ads6x98y 