I ran a race against Senator Ted Kennedy and beat him. And it had nothing at all to do with politics.

Pictures of the Kennedys aboard their sleek sailboats off the Cape Cod coast were ubiquitous: wind-blown hair, carefree smiles, gleaming white teeth. The Kennedys were known for their sailing prowess, and when it comes to sailboat races, they were avid competitors.

In a best-travel-memory race that pitted me, albeit unofficially, against a Kennedy, I took part in the biggest of the year in Cape Cod sailing circles, a three-day affair held each Memorial Day weekend.

The Senator, one of a couple hundred competitors, was entered in a sleek, 50-foot dark blue classic Concordia named ‘Mya’.

I was on a tugboat called the “Towline”.

“Hold her right at 160. Just set your sights on an object on the horizon and steer toward it”.

That said, Captain Jim Fox exited the bridge and left me alone at the helm of the tug, a former Coast Guard icebreaker with a bow that plowed the choppy water like a concrete wall, making nerve-wracking arcs to port or starboard with the slightest turn on the giant wheel.

I peered with increasing panic at the sea of sailboats around me, planted my feet, and struggled to stabilize the meandering tug.

I was smack dab in the middle of the Figawi Race Weekend off the coast of Hyannis on Cape Cod. Over two hundred sailboats were zipping around me, skimming and tacking and reaching and running like pesky gnats, all bent on being the first to complete the run from Hyannis on the mainland to the island of Nantucket 30 miles in the distance.

It was a spectacular if unnerving sight and I was convinced that before the race ended I would be personally responsible for ramming and sinking one or more of the sleek crafts.

The “Towline”, built originally for the Coast Guard in 1962 and decommissioned in 1995, was owned by the Massachusetts Maritime Academy and used for training future seamen.

Her official function the day of the race was to carry the gear of Academy seamen who were crewing several of the institution’s boats. I was onboard the tug as an invited guest, thanks to my good friend Eileen Milanette, then the Maritime Academy Dean of Students.

The Figawi Race, with its long and colorful history, is considered one of the premiere sailing events in New England. It began in 1972, when three sailing buddies, heatedly debating their respective abilities and boat speed, decided the only way to settle the dispute was to conduct a race from Hyannis to Nantucket.

The race was run, and the sole winner was crowned. The event, originally supported by a small group from the local Hyannis sailing community, quickly grew to a race with a very large geographic draw and over 200 entrants in 14 classes.

How the event got its name is an amusing tale in itself.

It seems it is not uncommon for Nantucket Sound to be shrouded in springtime fog. In the early years of the race, when electronic guidance systems were prohibited, boats sometimes missed Nantucket entirely, unable to find the island in the thick pea soup. It is said that the term “figawi” roughly translates from a more civil “Hmmmm, I wonder where the heck we are”.

Colorful history aside, the Figawi is an extraordinary event, one that draws sailors and non-sailors alike. (I clearly fit into the latter category). The festivities began with the skipper’s meeting on Friday night. Held dockside at the Hyannis Yacht Club, it bore a strong resemblance to a Wisconsin tailgate party, complete with smoking charcoal grills and plenty of frosty brews.

The race itself took place the following morning, helicopters and small aircraft droning overhead as the various classes of boats executed staged starts.

Before long, the graceful sails were mere dots on the horizon, and the accompanying spectators, many of them in large motor launches, picked up speed and headed across Nantucket Sound toward the island.

Onboard the Towline, I struggled to “hold her at 160” as ordered by Captain Fox, who I could hear below in the galley, laughing and telling sea stories, good-naturedly warning guests that most of them were lies.

The attraction of the beautiful destination, Nantucket, certainly accounts in part for the popularity of the annual race weekend. The island’s small inns and quaint guest houses quickly fill to capacity, and the picturesque harbor is outfitted with colorful banners and flags.

Though the race is an important one, there is also a strong emphasis throughout the three-day event on hearty competition, inventive story-telling, and non-stop eating, including a huge clambake under the Figawi Tent on the island. 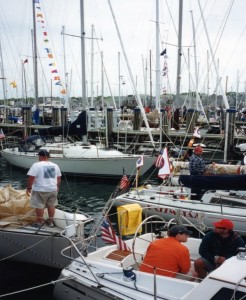 Once the Saturday race is over, typically in three to four hours depending on wind and weather conditions, the Nantucket skyline bristles with sailboat masts, and camaraderie among sailing crews begins.

Moving from boat to boat, the revelers renew friendships and share plans for the upcoming sailing season. Music hums and throbs from several venues simultaneously, creating a high-energy atmosphere that escalates in intensity as the weekend wears on.

This boat-to-boat dockside party continues into the early morning hours, spilling over into the narrow cobblestone lanes of Nantucket. Sunday brings what is billed as a “very unofficial” joke-telling session at the Figawi Tent, followed by more food and more music.

On Monday morning, Memorial Day, those sailors who are so inclined stage a return race to Hyannis.

Non-sailors who follow the excitement to Nantucket claim every room on the island, fill the tables at restaurants, jostle one another in the small inviting shops, wander the narrow streets admiring the charming gray-shingled homes and lush gardens, and head to more remote regions of the 14-mile-long strand in search of one of many pristine beaches.

And now, the real story about the race. The part about me beating Senator Ted Kennedy is only partially true. In fact, you might say it is part sea story.

While Kennedy did cruise in to Nantucket Harbor well behind half the field of sailboats (as well as the Towline), finishing 105th out of 217 entrants, I was no longer at the helm of the now-docked tug boat.

Captain Fox had wisely reclaimed the wheel as we were about to enter the narrow harbor, saving several boats ahead of us, and likely the dock, from certain annihilation.

But as travel memories go, it was a clear winner.