The pewter gray sky, awash with early morning mist, did nothing to dampen our spirits as we left the sprawling city of Antalya on Turkey’s Mediterranean coast.

Our search for antiquity would take us northwest into the imposing Taurus Mountains, through fragrant pine forests, steeply upward along twisting switchbacks, then nose-diving in sharp descents and flattening into broad fertile valleys on our trek toward the Aegean Sea.

We were a small group, eager to explore. The archeological sites we planned to visit were a Who’s Who of the Ancient World: Hieropolis in Pamukkale, the city of Aphrodisias, the Temple of Apollo, the great Ionian city of Miletos, and the granddaddy of them all, Ephesus.

Osman, our historian, greeted us as he would every day.

“A special good morning, my dear and noble friends. I am loving to be with you. Today we will have an adventure.”

“Günaydin”, we chanted, drawing from the paucity of Turkish phrases we’d learned since our arrival days earlier.

Osman, a licensed guide and specialist in Turkey’s archeological sites, was his own Turkish tapestry — historian, intense adventurer, gentle philosopher and strident politician. 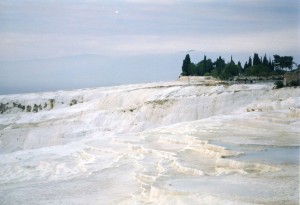 Throughout our journey, he proved to be a burbling fountain of ancient and contemporary facts, heavily laced with strong opinions.

If he had a shortcoming, it was that he talked too much. One disgruntled group member muttered, “The man is absolutely incapable of brevity”.

True, Osman’s propensity for verbal rambling combined with his eagerness to share little- known sights and tidbits meant we would rarely be on schedule. More than once, we found ourselves in places that were not on our agenda.

Osman warmed to the story of Turkey’s antiquities north of Denizli where Pamukkale’s striking white calcareous depressions, normally filled with shimmering waters, were nearly dry as a bone.

Overlooking the snowy-white landscape, he launched into a tirade against the developers who had sapped the ancient thermal waters for modern hotel spas, drying up the natural basins that had once filled with cascades of heavily carbonated water.

Waving his arms, Osman could barely contain his ire, ignoring the fact that several years earlier the offending hotels had been bulldozed down and relocated several safe miles away.

“Fiends,” he shouted, punching the air with his fists. “Pirates of the environment!” Other visitors to the site exchanged perplexed glances.

Energized by his speech, Osman hastened us to nearby Hieropolis where he prodded us rapidly up the steep 50 rows of the Second Century Roman Theater.

At the top marble tier he commanded us to sit.

As we turned to follow his gaze over the wide valley, the sun dipped low on the horizon. From our lofty perch we had a stunning view of the north Roman Gate and the arrow-straight arcade.

In silence, we watched as the last rays of light coaxed soft rosy reflections off the distant marble promenade.

The next day at the sprawling ancient city of Aphrodisias, Osman reflected on its importance as a center of medicine and philosophy from its inception in the First Century BC, likening it to the university centers of the modern world.

“Not much has changed,” he said, seeming to drift off into unshared thoughts.

As we climbed over huge columns tilted here and there, Osman encouraged one of our group members, an aspiring Paris actress, to test the flawless acoustics from a long theater stage.

He fed her lines from Shakespeare in his thick Turkish accent, and her French-accented responses echoed into the vast stone expanses.

Then he led us to the enormous ancient stadium that once had a capacity of 30,000 spectators. Here, arms waving and adrenaline flowing, he told of the fierce competitions that pitted athlete against athlete, musing how similar it must have been to modern European soccer and American football.

It was now 3:00 p.m. and we had eaten nothing since an early-morning breakfast. Osman declared, “And now my dear and noble friends, we are just in time for lunch.”

He led us to a small restaurant in the heart of tiny Didyma near the Aegean Sea.

We were quickly seated next to a wall of windows overlooking the Temple of Apollo. This site was not as imposing as others we’d seen, but it was historically significant, a fact Osman insisted on sharing with us as we ordered sea bass and marinated cucumbers, the only offerings left in the kitchen.

The Temple was once the center of the sacred area of Miletos, Osman pointed out, and names of the laborers were clearly visible on the walls and steps. We must see this, he insisted, urging us to hurry through our meal.

With barely a moment’s pause he took us to the heart of the jumbled site, urging us to climb among the giant marble blocks to see the massive Head of Medusa, one of three winged sisters, now herself turned to stone and sporting a long crack across her worried face.

“Now we will have an adventure!” announced Osman, as he pointed the van toward Miletos, a short distance from Didyma. We were several miles away from our next scheduled stop, an overnight in the Aegean port of Kusadasi.

We arrived at Miletos just as the sun slipped below the horizon. The site was deserted and the evening air had settled into a crisp stillness.

As if cued by an unseen set director, a full moon rose toward the heavens, first ochre, then silvering, sliding slowly up the imposing Ionic columns. We watched in awed silence.

“Excellent! We will see Miletos by moonlight!” enthused Osman, undaunted by the fact that we were three hours behind schedule and had neither flashlights nor a site map other than the one he carried in his head.

Half of the small group opted out of the latest adventure and, grumbling, returned to the van.

The rest of us followed our determined leader across the rocky moon-brightened terrain, clambering over massive carved blocks of marble and teetering on fallen columns like clumsy gymnasts. 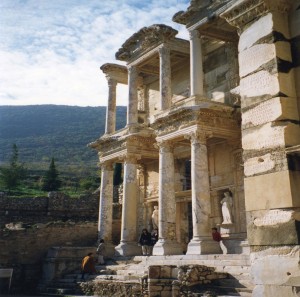 “Come. This you must see,” whispered Osman, leading us over ancient rubble through low scrubby bushes where unseen creatures skittered into the night.

In the eerie stillness we crested a small hill to behold a column-lined ceremonial road overlooking a shimmering moon-washed pond.

At that moment, the haunting hoot of an owl echoed from somewhere among the giant columns.  Then, an answering hoot, this one more distant. We exchanged uneasy glances.

“The spirits are with us tonight”, whispered Osman.

The next day, Osman was at his oratorical pinnacle, leading us through the stunning sights of Ephesus, the best preserved classical city in the Eastern Mediterranean that over 2000 years ago was an Aegean coastal city of 250,000 inhabitants.

Once we were seated high in the vast amphitheater, Osman intoned from below, “The fish will jump, the wild boar will run away, and you will establish a city with a brilliant future here”, apparently quoting the soothsayers of Delphi as they spoke to Androkios, the ancient city’s founder.

Then, without elaborating on the puzzling statement, he led us down the stone steps to the wide marble walkway below. Reaching into a gnarled tree at the edge of the stairs, Osman plucked several olives and pressed one into my outstretched hand.

“From a tree as old as Ephesus,” he claimed, closing my fingers around the small fruit. I wondered if that was possible.

We continued to wander, following along the way heart shapes and images of women carved centuries ago in the marble sidewalks to guide sailors from the port to an ancient brothel. Construction of that lavish facility dates from 98-117 AD, and mosaic tiles in the reception area were still visible.

Next we climbed the steep steps to the imposing Celsus Library. Built in 117 AD, it was a monumental tomb for Gaius Julius Celsus Polemaeanus, the governor of the province of Asia and once housed over 12,000 rolled papyri, kept in cupboards in niches on the walls.

Later that evening, our adventures at an end, Osman and I wandered the cobblestone streets of Kusadasi in search of modern-day Turkish music CD’s to add to my collection. He was uncharacteristically quiet, a study in introspection.

Over a steaming cup of hot apple tea at a sidewalk café, he confided that he had long sought to understand the true purpose of his life, thus far without success. This troubled him, and he wondered aloud what his good and caring god had in mind for him.

“I believe your mission is to proclaim to travelers like me, ‘Today we will have an adventure!’  And then deliver on that promise.”